MC Daily Rewards is a simple Minecraft daily rewards plugin, which can make your players stay longer on your server. It’s a beginner-friendly plugin, which doesn’t require any techie knowledge on how to use it.

How to install MC Daily Rewards

To install MC Daily Rewards, you will need to follow these simple steps:

1. Add the plugin into your plugins folder

2. Create a database in your host and connect it to the plugin’s config.yml.

3. Restart the server and you are all done.

4. You can also follow the instructions from our tutorial on How to Setup MC Daily Rewards on a Minecraft Server.

How to setup MC Daily Rewards

If you had successfully connected MC Daily Rewards with your database, you should see another file in the Bonus folder, which is called April.yml.

This file contains all the days in a full month, which have editable lines of code. 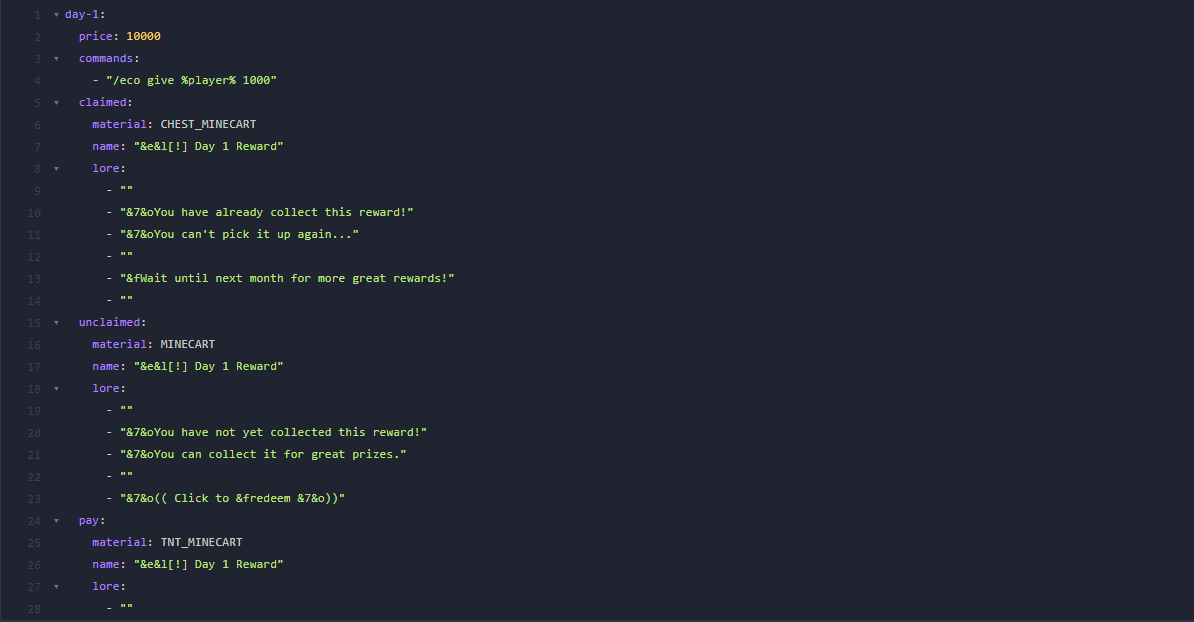 If you want to edit the rewards and set custom ones, here’s what you should know before doing anything.

Price – The price that a player should pay to open a reward from the previous day.

Commands – These are the commands, which are being executed when a player takes a reward.

Material (claimed) – The material, which will be shown in the daily rewards once a reward has been claimed. You can fully edit this.

Name – The name can be set to anything, but for simplicity we use “Day 1 Reward”.

Lore – The text, which is shown when hovering on the reward.

Material (Unclaimed) – The material, which will be shown in the daily rewards if a reward hasn’t been claimed. You can fully edit this.

MC Daily Rewards offers a simple GUI for players, which they can call by writing the command /dailybonus. Once the command is written the GUI will appear and show them the rewards, which are claimed or had been left unclaimed. Once a player clicks on the reward for the day, the command will automatically execute and send the assigned reward to the player.

MC Daily Rewards operates with only 2 commands, which are “dailybonus” and “bonusreset ”, but what do they do?

/dailybonus – A simple command, which opens the GUI for the player and will show him claimed and unclaimed rewards.

/bonusreset – A command, which is used only by admins or OP’s, as this commands resets the player’s cooldown of taking the daily reward.